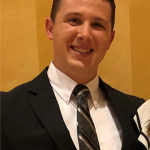 Drew is a 2010 graduate of Bridgewater College, majoring in Business Administration with a Concentration in Accounting.  He completed his Masters of Accounting degree in 2011 from James Madison University.  In 2011 he also began his career in public accounting auditing with Yount, Hyde, & Barbour P.C., based out of Winchester, Virginia.  He became a licensed Certified Public Accountant in July of 2012.

Drew began his Rockingham Cooperative career in November of 2015 as a Staff Accountant and has grown in his responsibilities since joining the cooperative.  In his spare time, his hobbies include playing baseball, hunting, fishing, & camping.

Rockingham Cooperative has been serving our community since 1921 and is Virginia’s oldest member-owned Cooperative.  They proudly have 14 locations in 6 counties across Virginia offering a variety of products and services to their member-owners and customers.

You have Successfully Subscribed!